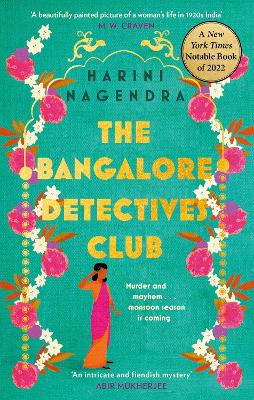 'The first in an effervescent new mystery series. . . a treat for historical mystery lovers looking for a new series to savor (or devour)' NEW YORK TIMES

'A gorgeous debut mystery with a charming and fearless sleuth . . . spellbinding' SUJATA MASSEY

'Told with real warmth and wit. . . A perfect read for fans of Alexander McCall Smith and Vaseem Khan' - ABIR MUKHERJEE

'The classic whodunnit with the added appeal of a female sleuth in Colonial India. . . fascinating' RHYS BOWEN

Add a jealous mother-in-law and having to wear a flowing sari into the mix, and you've got a problem.

When clever, headstrong Kaveri moves to Bangalore to marry doctor Ramu, she's resigned herself to a quiet life.

But that all changes the night of the party at the Century Club, where she escapes to the garden for some peace - and instead spots an uninvited guest in the shadows. Half an hour later, the party turns into a murder scene.

When a vulnerable woman is connected to the crime, Kaveri becomes determined to save her and launches a private investigation to find the killer, tracing his steps from an illustrious brothel to an Englishman's mansion. She soon finds that sleuthing in a sari isn't as hard as it seems when you have a talent for maths, a head for logic and a doctor for a husband.

And she's going to need them all as the case leads her deeper into a hotbed of danger, sedition and intrigue in Bangalore's darkest alleyways . . .

BOOK ONE IN THE BANGALORE DETECTIVES CLUB SERIES

'Told with real warmth and wit. . . Harini Nagendra has created an intricate and fiendish mystery with a wonderful duo of amateur sleuths Kaveri and Ramu at its heart, and capturing the atmosphere and intensity of Bangalore in the roaring twenties. I can't wait for the next instalment. A perfect read for fans of Alexander McCall Smith and Vaseem Khan' - ABIR MUKHERJEE

'Riveting. [Nagendra's] use of colonial history is thoroughly fascinating, with devastating depictions of the airy condescension of the British. A fine start to a promising series' BOOKLIST Starred Review

'Harini Nagendra takes us to a wonderfully unfamiliar world in this delightful debut mystery. . .I couldn't put it down' VICTORIA THOMPSON, USA Today bestselling author of Murder on Madison Square

'Absolutely charming . . . this one is a winner!' CONNIE BERRY, USA Today best-selling and Agatha-nominated author of The Kate Hamilton Mysteries.

'An enjoyable trip back in time with a spunky young woman for company.' R V RAMAN, author of Fraudster and A Will to Kill

'This lush mystery will transport you to heady 1920s Bangalore, where new bride Kaveri stumbles into sleuthing-while dragging her doctor-husband into the fray. Mouth-watering fashion and food set against simmering colonial intrigue in this delicious whodunit can be devoured in one sitting.' SUMI HAHN, author of The Mermaid from Jeju