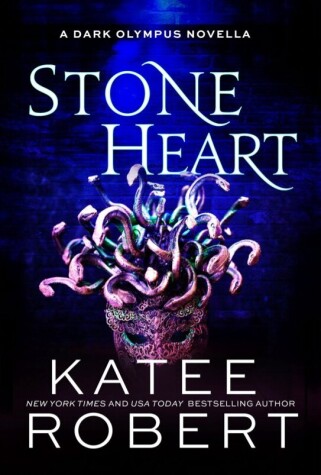 In the city of Olympus, people only speak about Medusa in whispers. She’s Athena’s knife hand, the one sent when Athena wants someone to disappear. No one asks Medusa what she wants, but she owes Athena her life, and if staining her hands with blood is the only way to repay the debt, it’s a small price to pay.

Until Athena sends her after Calypso, the mistress of the rich politician Odysseus. Calypso is beautiful and cunning and she’ll do anything to keep her life—including seducing her would-be assassin.

What starts as a ploy to escape quickly spirals into genuine interest. But it doesn’t matter that they’ve finally found something special together. Athena will have her blood, and this time not even crossing the River Styx will save them… He was supposed to be a myth. But from the moment I crossed the River Styx and fell under his dark spell...he was, quite simply, mine.

*A scorchingly hot modern retelling of Hades and Persephone that's as sinful as it is sweet.*

Society darling Persephone Dimitriou plans to flee the ultra-modern city of Olympus and start over far from the backstabbing politics of the Thirteen Houses. But all that's ripped away when her mother ambushes her with an engagement to Zeus, the dangerous power behind their glittering city's dark facade.

With no options left, Persephone flees to the forbidden undercity and makes a devil's bargain with a man she once believed a myth...a man who awakens her to a world she never knew existed.

Hades has spent his life in the shadows, and he has no intention of stepping into the light. But when he finds that Persephone can offer a little slice of the revenge he's spent years craving, it's all the excuse he needs to help her-for a price. Yet every breathless night spent tangled together has given Hades a taste for Persephone, and he'll go to war with Olympus itself to keep her close...

"I get shivers just thinking of their interactions. SHIVERS."-Mimi Koehler for The Nerd Daily She was the face that launched a thousand ships, the fierce beauty at the heart of Olympus...and she was never ours to claim.

*A scorchingly hot modern retelling of Helen of Troy, Achilles, and Patroclus that's as sinful as it is sweet.*

In Olympus, you either have the power to rule...or you are ruled. Achilles Kallis may have been born with nothing, but as a child he vowed he would claw his way into the poisonous city's inner circle. Now that a coveted role has opened to anyone with the strength to claim it, he and his partner, Patroclus Fotos, plan to compete and double their odds of winning.

Neither expect infamous beauty Helen Kasios to be part of the prize...or for the complicated fire that burns the moment she looks their way.

Zeus may have decided Helen is his to give to away, but she has her own plans. She enters into the competition as a middle finger to the meddling Thirteen rulers, effectively vying for her own hand in marriage. Unfortunately, there are those who would rather see her dead than lead the city. The only people she can trust are the ones she can't keep her hands off-Achilles and Patroclus. But can she really believe they have her best interests at heart when every stolen kiss is a battlefield? There's nowhere more dangerous than Olympus...and no one more captivating than its golden god: Apollo. Keeper of secrets, master of his shining realm...and the only man I am powerless to deny.

*A scorchingly hot modern retelling of Apollo and Cassandra that's as sinful as it is sweet.*

As a disgraced member of a fallen house, Cassandra Gataki has seen firsthand what comes from trusting the venomous Thirteen. But when the maddeningly gorgeous and kind Apollo asks her to go undercover as his plus-one at a week-long party hosted by a dangerous new power player...Cassandra reluctantly agrees to have his back.

On one condition: when it's all over, and Apollo has the ammunition he needs to protect Olympus, she and her sister will be allowed to leave. For good.

Apollo may be the city's official spymaster, but it's his ability to inspire others that keeps him at the top. Despite what the rest of Olympus says, there's no one he trusts more than Cassandra. Yet even as their fake relationship takes a wicked turn for the scaldingly hot, a very real danger surfaces... threatening not only Cassandra and Apollo, but the very heart of Olympus itself.