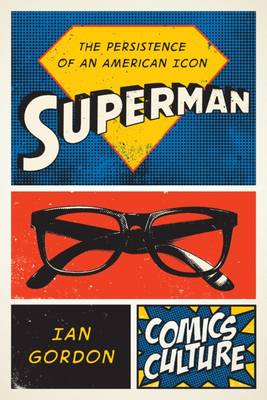 Published 13 February 2017
In Superman: The Persistence of an American Icon, Ian Gordon explores Superman's status as an American icon and examines how a fictional character has managed to sustain that pre-eminent standing for almost eighty years. Explaining how this super hero became an icon of American culture is not simply a process of establishing some essential hallmarks of the character and then tracing these signs in each new incarnation of Superman. Instead, Superman is shown by Gordon to be an amalgam of factors including myth, memory, nostalgia, intellectual property regimes like copyright and trademark, authors, readers, fans, collectors, comic books, comic strips, radio series, movie serials, television shows, animation, toys and collectibles, and feature films.

Superman is a mythos because of the sheer amount of material and the competition over which memories are essential to the character. And what we need Superman to represent has been affected by the country's needs in times of poverty, war, prosperity, and other challenges. Gordon shows that an understanding of Superman requires us to address the way these factors figure into any negotiation of this character; he therefore analyzes Superman as a process, rather than as a fixed phenomenon. In this way, Superman: The Persistence of an American Icon answers the question of how a comic book character became and remains a symbol of American culture, thus contributing to a deeper understanding of ourselves.