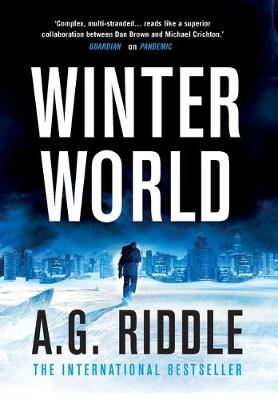 Published 7 February 2019
'Apocalyptic sci-fi at its best ... The action is anything but frozen' DAILY MAIL.

WITHIN THREE MONTHS, ICE WILL COVER THE EARTH, AND LIFE AS WE KNOW IT WILL END.

It was the last thing we expected, but the world is freezing. A new ice age has dawned and humanity has been forced to confront its own extinction. Billions have fled the glaciers, crowding out the world's last habitable zones. They can run from the ice, but they can't escape human nature: a cataclysmic war is coming.

In orbit, a group of scientists is running the Winter Experiments, a last-ditch attempt to understand why the planet is cooling. None of the climate models they build makes sense. But then they discover an anomaly, an unexplained variation in solar radiation... and something else. Close to the burning edge of the sun, they catch a fleeting glimpse of something that shouldn't be there...

Suddenly humanity must face the possibility it is not alone in the universe. And the terrifying possibility that whatever is out there may be trying to exterminate us.

'A complex, multi-stranded narrative spanning 700 pages that reads like a superior collaboration between Dan Brown and Michael Crichton' THE GUARDIAN. Published 2 July 2019
The Long Winter is over. We survived. But only just.

On a ruined world, we rebuild, watching the sky, waiting for any sign of their return.

With only nine million survivors from a population of billions, humanity's survival is far from guaranteed but with the glaciers receding, there is now, at least, a chance.

But out on the edges of the solar system, beyond Neptune's orbit, three vast asteroids have broken free from the Kuiper Belt and started the long fall towards the Sun. In two years time their trajectories will converge on Earth.

We have to face the truth: they are back. And this battle will be to the very end.

As humanity prepares its last stand in space and on the ground, it splinters. In our darkest hour, factions form and trust evaporates. And yet not all is lost. Dr James Sinclair has a plan that could ensure the species' survival, but it comes with enormous risks. Implementing it means navigating a course between two deadly enemies. One thing is certain: Sinclair's gambit will change the human race forever. Published 12 November 2019
Can humanity survive on a new world?

The last survivors of the human race escaped a ruined Earth. Their new homeworld – Eos – seemed perfect at first. Warm. Hospitable. Safe from the grid. But everything isn't as it seems.

The first colony of settlers have disappeared. Their settlement is still there, but everyone is gone. As Dr James Sinclair digs into the mystery of the lost colony, he discovers a series of spheres, buried on Eos. Are they the key to finding the lost colonists? Or are they responsible for their deaths?

Just as James is unraveling the secrets of the spheres, a storm hits Jericho City. Emma, recently elected mayor, struggles to lead her people to safety while James tries to make his way home. In the middle of the chaos, a new danger emerges – a threat no one saw coming.

With time running out to save the colonists, James and Emma will face their hardest choice yet in the final pulse-pounding instalment in the Long Winter trilogy.

'Apocalyptic sci-fi at its best. The action sling-shots from stage to stage like an intergalactic spaceship' Daily Mail