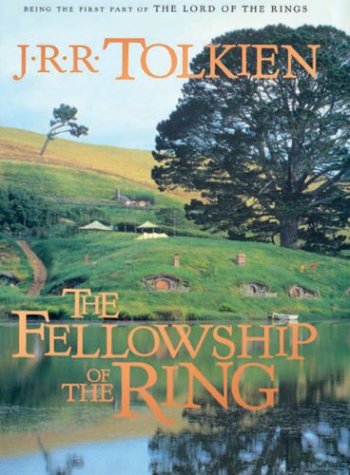 The Fellowship of the Ring

Published 29 July 1954
In ancient times the Rings of Power were crafted by the Elven-smiths, and Sauron, the Dark Lord, forged the One Ring, filling it with his own power so that he could rule all others. But the One Ring was taken from him, and though he sought it throughout Middle-earth, it remained lost to him. After many ages it fell into the hands of Bilbo Baggins, as told in The Hobbit. In a sleepy village in the Shire, young Frodo Baggins is faced with an immense task, as the elderly Bilbo entrusts the ring to his care. Frodo must make a perilous journey across Middle-earth to the Cracks of Doom, there to destroy the Ring and foil the Dark Lord in his evil purpose.
--back cover First ever illustrated paperback of part two of Tolkien’s epic masterpiece, The Lord of the Rings, featuring 16 colour paintings by Alan Lee, Conceptual Designer on Peter Jackson’s THE HOBBIT: AN UNEXPECTED JOURNEY.

Frodo and the Companions of the Ring have been beset by danger during their quest to prevent the Ruling Ring from falling into the hands of the Dark Lord by destroying it in the Cracks of Doom. They have lost the wizard, Gandalf, in the battle with an evil spirit in the Mines of Moria; and at the Falls of Rauros, Boromir, seduced by the power of the Ring, tried to seize it by force. While Frodo and Sam made their escape the rest of the company were attacked by Orcs.

Now they continue their journey alone down the great River Anduin – alone, that is, save for the mysterious creeping figure that follows wherever they go.

JRR Tolkien’s great work of imaginative fiction has been labelled both a heroic romance and a classic fantasy fiction. By turns comic and homely, epic and diabolic, the narrative moves through countless changes of scene and character in an imaginary world which is totally convincing in its detail.

Part of a set of three paperbacks, this sumptuous edition is available in a smart new livery, and is illustrated in colour by Alan Lee, award-winning artist and Conceptual Designer on Peter Jackson’s THE HOBBIT: AN UNEXPECTED JOURNEY.

The Return of the King

The armies of the Dark Lord are massing as his evil shadow spreads ever wider. Men, Dwarves, Elves and Ents unite forces to do battle agains the Dark. Meanwhile, Frodo and Sam struggle further into Mordor in their heroic quest to destroy the One Ring.

Impossible to describe in a few words, JRR Tolkien's great work of imaginative fiction has been labelled both a heroic romance and a classic fantasy fiction. By turns comic and homely, epic and diabolic, the narrative moves through countless changes of scene and character in an imaginary world which is totally convincing in its detail. Tolkien created a vast new mythology in an invented world which has proved timeless in its appeal. 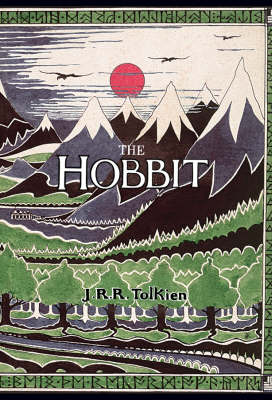 The definitive edition of J.R.R. Tolkien's most beloved book, sporting a facsimile of his original cover design and complete with colour plates of his own paintings, brand new reproductions of all his drawings, and colour versions of both maps.

Bilbo Baggins enjoys a quiet and contented life, with no desire to travel far from the comforts of home; then one day the wizard Gandalf and a band of dwarves arrive unexpectedly and enlist his services - as a burglar - on a dangerous expedition to raid the treasure-hoard of Smaug the dragon. Bilbo's life is never to be the same again.

Seldom has any book been so widely read and loved as JRR Tolkien's classic tale, The Hobbit. Since its first publication in 1937 it has remained in print to delight each new generation of readers all over the world, and its hero, Bilbo Baggins, has taken his place among the ranks of the immortals: Alice, Pooh, Toad... 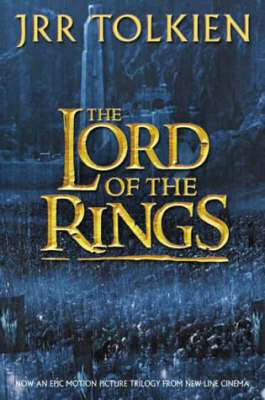 The Lord of the Rings

Published December 1966
The film tie-in edition of the popular, one-volume, edition of the Book of the Century, featuring an exclusive image from the film. Since it was first published in 1954, The Lord of the Rings has been a book people have treasured. Steeped in unrivalled magic and otherworldliness, its sweeping fantasy has touched the hearts of young and old alike. Nearly 100 million copies of its many editions have been sold around the world, and occasional collectors' editions become prized and valuable items of publishing. Now, the epic fantasy is to be filmed, with the first part of the movie trilogy, The Fellowship of the Ring, being released simultaneously worldwide on 14 December 2001 -- the second and third parts, The Two Towers and The Return of The King, following at yearly intervals. Already, the hype surrounding the filming of this monumental work has reached fever pitch, and images of the characters and landscape have become eagerly sought after. In order to whet the appetites of the millions of fans around the globe we will be publishing a special edition of the popular one-volume paperback, featuring an exclusive early -- as yet unseen -- image from the film.
A world exclusive edition of the Book of the Century, soon to be revealed as the movie experience of a lifetime. J.R.R. Tolkien 4-Book Boxed Set: The Hobbit and The Lord of the Rings

Published 1 October 2001
The complete four-book boxed set of the greatest fantasy epic of all time: The Lord of the Rings and its enchanting prequel, The Hobbit

When Thorin Oakenshield and his band of dwarves embark upon a dangerous quest to reclaim the hoard of gold stolen from them by the evil dragon Smaug, Gandalf the wizard suggests an unlikely accomplice: Bilbo Baggins, an unassuming Hobbit dwelling in peaceful Hobbiton.

Along the way, the company faces trolls, goblins, giant spiders, and worse. But as they journey from the wonders of Rivendell to the terrors of Mirkwood and beyond, Bilbo will find that there is more to him than anyone—himself included—ever dreamed. Unexpected qualities of courage and cunning, and a love of adventure, propel Bilbo toward his great destiny . . . a destiny that waits in the dark caverns beneath the Misty Mountains, where a twisted creature known as Gollum jealously guards a precious magic ring.

This boxed set includes:
THE HOBBIT
THE FELLOWSHIP OF THE RING
THE TWO TOWERS
THE RETURN OF THE KING 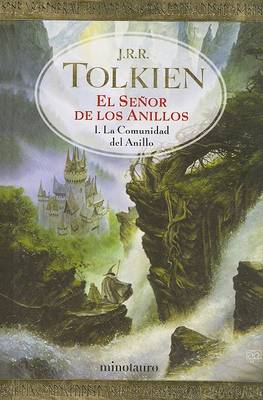