In the Reign of King John: A Year in the Life of Plantagenet England 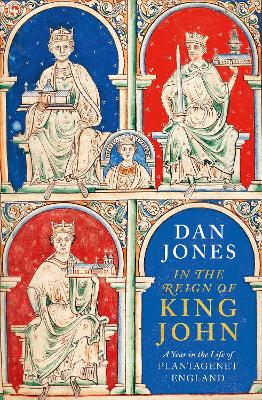 In the Reign of King John: A Year in the Life of Plantagenet England

A new, beautifully illustrated edition of Realm Divided, Dan Jones's portrait of Plantagenet England in the reign of King John.

1215 was not just the year of Magna Carta and King John's war with his barons, but a year of crusading and church reform, of foreign wars and dramatic sieges, of trade and treachery; a year in which England was invaded by a French army and London was stormed by angry barons; and the supposedly impregnable castle at Rochester was brought down with burning pig fat.

But this was also a year in which life, for most people, just went on. In the Reign of King John thus opens a window onto everyday life in thirteenth-century England: home and church, love and marriage, education and agriculture, outlawry and hunting, food and clothing. It offers a vivid and authoritative portrait – from royal court to peasant wedding – of medieval life in the round, as well as an exhilarating and revelatory exploration of the big themes of politics, warfare, religion, feudalism and the law during a transformative year in English history.

'Commanding and piercingly insightful... Packed with moments that make you stop in your tracks' Daily Telegraph, Books of the Year

'When it comes to rip-roaring medieval narratives, Jones has few peers' Sunday Times

'Jones has a terrific eye for humanising stories and the telling detail... It is the snapshots of life as it was lived that make this book so engaging' Daily Telegraph

'Jones is to be congratulated for telling his story with panache and originality. He deserves to be widely read' BBC History Magazine

'Dan Jones is certainly an entertainer, but also a fine historian who knows how to render scholarship into accessible prose' The Times