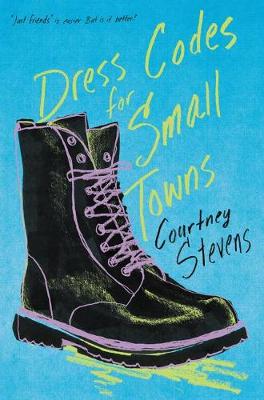 "A poetic love letter to the complexities of teenage identity, and the frustrations of growing up in a place where everything fits in a box-except you."-David Arnold, New York Times bestselling author of Kids of Appetite "Courtney Stevens firmly reasserts herself as a master storyteller of young adult fiction; crafting stories bursting with humor, heart, and the deepest sort of empathy."-Jeff Zentner, 2017 Morris Award Winner for The Serpent King "Courtney Stevens carries us into the best kind of mess: deep friendships, small town Southern gossip, unexpected garage art, and unfolding romantic identity."-Jaye Robin Brown, author of Georgia Peaches and Other Forbidden Fruit As the tomboy daughter of the town's preacher, Billie McCaffrey has always struggled with fitting the mold of what everyone says she should be. She'd rather wear sweats, build furniture, and get into trouble with her solid group of friends: Woods, Mash, Davey, Fifty, and Janie Lee. But when Janie Lee confesses to Billie that she's in love with Woods, Billie's filled with a nagging sadness as she realizes that she is also in love with Woods...and maybe with Janie Lee, too.
Always considered "one of the guys," Billie doesn't want anyone slapping a label on her sexuality before she can understand it herself. So she keeps her conflicting feelings to herself, for fear of ruining the group dynamic. Except it's not just about keeping the peace, it's about understanding love on her terms-this thing that has always been defined as a boy and a girl falling in love and living happily ever after. For Billie-a box-defying dynamo-it's not that simple. Readers will be drawn to Billie as she comes to terms with the gray areas of love, gender, and friendship, in this John Hughes-esque exploration of sexual fluidity.

Exasperated, Batman removed the mask and laid it carefully next to the little girl on the bleachers.

David’s jaw dropped. “You’re a girl,” he said to Batman.

“Yeah, so?” she said. She strutted back to home plate and sent a pitch sailing into the grass—the farthest hit of the day.

He slapped her a high five as she crossed home plate. “I didn’t know Batman could be a girl.”

She huffed. “Well, Buckaroo, a girl can be anything.”

— About a group of friends trying to save a dying hometown tradition all the while growing up, finding their identities, and refusing to be contained in boxes and labels. Because we can’t be contained!
Rating: 4.5 stars

If I had to describe how I felt reading this book using one gif, I would select the following:

This was such a special book. I felt a wonderful range of emotions as I read this book, and I felt so many more feels than I expected. This book started off with a prank gone wrong, and then a great loss. So I was laughing and then totally subdued right away, and that roller coaster of emotions continued throughout. There were highs and lows, I laughed and cried, and I sort of loved every second of it.

A really special part of this book was the Hexagon, that's what Billie called her group of friends. They were an interesting and diverse group with a fabulous dynamic. I loved when all six interacted together, but I also liked when Billie interacted with the members one-on-one. The most stellar interactions for me, were between Billie and Davey. Davey was the newest member of the Hexagon, and he had his own baggage to deal with, but when he finally started opening up to Billie, we got to see what a beautiful human he was. He had so much depth and just won my heart. He was supportive and selfless. He ignored his own desires and encouraged Billie to follow her heart and take time to figure herself out. He was a sweet, precious marshmallow.

"The year I was seventeen, I have five best friends - a pixie, a president, a pretender, a puker, and a douchebag - and I was in love with them all for different reasons."

Billie was sort of phenomenal too. She was so complex and multifaceted. She had such an intriguing and authentic voice. I really liked being in her head, and seeing her through her struggles. She set off to figure out her sexuality, but she really found out a lot more about herself and others along the way. There were some awesome things Stevens did in the story, which just took the it to the next level and made it so special. There was this surprise towards the end, and I thought it was brilliant, because it solidified the idea that we shouldn't be too quick to pass judgements. We may be surprised by others and ourselves, sometimes. There was something Billie did throughout the book. She would write epitaphs for tombstone in her head. This one was my favorite, and really summed up Billie for me:

I adored Otters Holt. Stevens constructed such a quaint little town. She revealed its physical beauty to us, as well as the colorful characters who inhabited the town. We learned of the town's history and traditions, and I can admit to loving it. As with anything that seems too good to be true, the town had some negative qualities too, and Stevens did not shy away from them. I loved learning about Otters Holt, because understanding where Billie was from helped me understand her better.

A big part of this book, is Billie struggling with her identity, with sexuality playing a big role. I felt the topic was approached from all sides and it felt really honest to me. I have to admit, I feel like we put too many labels on things and people, and I found it refreshing that Billie was left without one. I constantly question the need to do so, and I was sort of thrilled with the way Stevens left that. No boxes, no labels, just Billie. I think I might actually love that.

So, if you know me, you may be able to guess why 4.5 and not 5 stars - the ending. We were lucky to get an epilogue, but I needed more closure than it provided. It's just who I am, a totally needy reader. It didn't not diminish the overall wonderful feeling I had when I finished this book, because my heart was quite full. However, my head wanted a few answers, and though I think I understand why Stevens made that choice, I still wanted more.

This is my first book by Stevens, and I found her writing to be something special. When I first started reading, there was something captivating in the rhythm that just pulled me in, and the nuggets! There are so many brilliant nuggets of wisdom and lovely quotes. I was highlighting like a fiend. Some lovely examples:

"Death can muddle beliefs and raise questions, but it makes love crystal clear."

"We carry it. It carries us. The real weight is carrying each other."

"Here, Davey's a watercolor with smeared edges and paint running down the page. Loose. At home, he's a pencil drawing. I like this Davey better."

"Jealousy might be a shallow well, but I bend my face to it all the same and take a drink."

"Brother Scott taught me that even if people are boxes, they are boxes on a Rubik's Cube that shift. One turn, one conversation, one thought - all shift the cube."

"Mom and I, well, we exist in much more incorporeal space. I don't measure her love in hours spent with me. I measure it in hours spent understanding me. "

"Most people want puddles to splash around in; Thom wants souls where scuba diving is encouraged."

"And at the end of it, I am a dandelion, and Davey is a gale-force wind. He scatters me everywhere."

Overall: a wonderful and heartfelt tale of finding one's identity. It's a story of friendship and love, devotion and dedication. I laughed, I cried, I even swooned a few times. A throughly satisfying reading experience.

**I would like to thank the publisher for the advanced copy of this book. Quotes are from an ARC and may change upon publication.

There were some things I really enjoyed about this one, a couple of things I didn't, and one thing that just kind of needs a mention, though it's neither good nor bad.

The Thing I Want to Mention:

Bottom Line: While I absolutely adored the characters and relationships in this book, at times I felt underwhelmed by the plot. Still, absolutely a valuable and beautifully written story I'm very glad to have read.