From World Order to Global Disorder: States, Markets, and Dissent 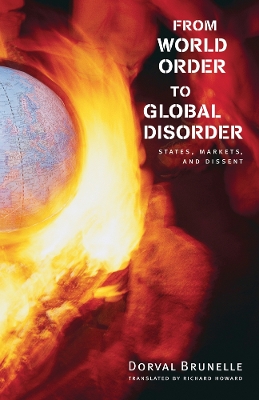 From World Order to Global Disorder: States, Markets, and Dissent

Anti-globalization activism world-wide attests to the tensionsbetween globalization and civil society. To better understand thisfraught relationship, Dorval Brunelle compares two social ordersseparated by a half-century. The post-World War II order entailed abroad vision uniting three complementary objectives - security,justice, and welfare - which were entrusted to a network ofinternational and national institutions. In contrast, globalization,with wealth as its only objective, is undermining and overhauling thevalues and institutions of the previous order, including the UnitedNations and the welfare state.

From World Order to Global Disorder demonstrates theprofound effect of globalization on relations between the state, civilsociety, and markets, as well as on collective and individual rights.As neo-liberalism evolves into globalization, governments are eschewingtheir role as public guardians and are instead bartering the veryassets and resources their citizens' labour and activism createdand preserved. However, no constitution makes governments owners ofcollective assets: governments are merely trustees. In this context,the world's citizens have a tremendous task before them: in thewake of the welfare state, their social forums are indispensable in thequest for a more just and equitable world.