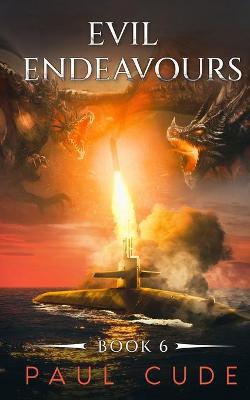 Evil is on the loose, while the planet still burns, leaving the crestfallen heroes little time to mourn their devastating losses in the aftermath of ‘A Fiery Farewell’.

The rightful custodians of the dragon domain have retaken the capital at phenomenal cost, but pockets of resistance remain, fighting fiercely for their misshapen beliefs and a dark destiny.

Will a surprise appearance by a magical legend with ties to the past, help or hinder the hunt for the malign Manson and Earth?

With hellfire raining down on the seas around the British Isles and innocent civilians dying for fun, will a fight for the future at one of the world’s most iconic landmarks prove a turning point?

Death stalks the shadows, in the form of a hidden, trusty lieutenant, leading to a single question: will one of the friends pay with their life?

Cast out, his scheme in ruins, can the psychopathic dark dragon leader use magic in conjunction with a stolen, armed, nuclear submarine to exact the perfect revenge?

As luck and crucially, time run out, will Armageddon be avoided and the malevolent murderers thwarted?

Check out the penultimate volume in ‘The White Dragon Saga’ NOW!