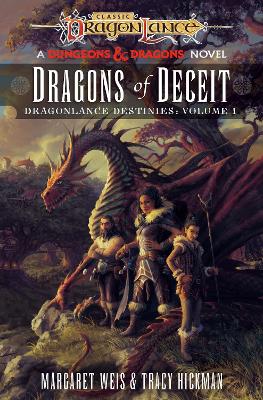 The first new Dragonlance novel from Margaret Weis and Tracy Hickman in over a decade, and featuring fan-favorite characters from the iconic first two trilogies, Dragonlance Chronicles and Dragonlance Legends--books that brought a generation of readers into the fantasy fold.

Destina Rosethorn--as her name implies--believes herself to be very much a favored child of destiny. But when her father dis in the War of the Lance, her carefully-constructed world comes crashing down. Not only does she lost her beloved father, but the legacy he has left her: a wealthy fiance, and rule over the family lands and castle. With nothing left in the world to support her but wits and determination, she hatches a bold plan: to secure the Device of Time Journeying she read about in one of her father's books and prevent her father's death.

The last known holder of the Device was one of the Heroes of the Lance: the free-spirited kender, Tasselhoff Burrfoot. BUt when Destina arrives in Solace--home not only to Tas, but to fellow heroes Caramon and Tika Majere--she sets into motion a chain of events more deadly than she had ever anticipated: one that could change not only her personal history, but the fate of the entire world, allowing a previously-defeated evil to once again gain ascendancy.

Many years ago, I stumbled across a book called Dragons of Autum Twilight, book one in the Dragonlance Chronicles. There was a dragon on the front (I’m a sucker for dragons), and characters who looked right out of the cover at the reader, inviting them on an adventure. I opened the book and immediately fell in love with the world of Krynn, the characters, and the writing.

Fast forward more years than I’ll admit. I’ve read those books more times than I can count. I have devoured every new novel that takes place in Krynn, seen visions of the world painted by many authors. Each new novel adds to the lore and shows a new perspective. I like the majority of them, but the books by Margaret Weis and Tracy Hickman, the creators of the world of Krynn, are special. I was ecstatic to hear the news that they were returning to the world they birthed.

Dragons of Deceit is the first of the new trilogy, Dragonlance Destinies. It’s been years since the last Dragonlance written by the masters was released, but they didn’t miss a beat. I wondered before reading it if this book would appeal more to new readers or to readers returning and hoping to see the characters they love.

The thing that I’ve always loved about the Dragonlance series is that it feels as though the world continues long after you’ve read the last sentence and closed the book. Reading Dragons of Deceit was like catching up with friends I haven’t seen in a while. They’ve had new adventures, met new people. The world has kept going, but it happily welcomed me back.

The book follows Destina, the daughter of a Solamnic knight. She loves her father, the knighthood, and all it stands for, until the oath all knights take (“My honor is my life”) causes her to lose him. Her life crumbles around her and she hatches a hare-brained scheme: travel back in time and save her dad. Of course, in order to do that, she’ll have to visit a certain well-traveled kender to acquire the Device of Time Journeying. That’s when things start to go sideways, as they always do when kender are involved.

Sometimes a long-running series finds itself in a bind. Do you continue with a storyline that new readers might be confused by, but rewards longtime readers? Or do you tell a story that has an entry point for new readers, risking alienating returning readers who want something new (I’m thinking of the multitude of Spiderman origin stories here)?

Weis and Hickman cleverly sidestepped this issue and wove a tale that will appeal to new readers and longtime fans alike. There is a mix of old and new characters, and a story arc that leans on already-established lore while still managing to be an entry point. All the important history is given throughout the book, while still somehow avoiding the dreaded info dump. New readers will be able to follow the plot without confusion, although there are things that returning readers will appreciate more.

Destina is an intriguing character, one at odds with herself. She is loyal and looks up to her father but is rather snotty toward her mom. She puts a huge burden of responsibility on herself, and it weighs her down until she has nothing left. I can’t say that I liked her in the usual sense; she was distinctly unlikable at times, which sometimes makes for a more complex story. I couldn’t fault her motivation. Wouldn’t we all do pretty much anything to help a loved one if we had the chance?

Tas was fantastic, of course. I really love that doorknob of a kender! He’s the perfect blend of innocence and unknowing wisdom. He provided laughs aplenty and a few moments that caused me to choke up a little. There’s a scene involving a helm topped with the hair from the mane of a griffin (if you know, you know) that caused my stone heart to melt.

The story was fast-paced and exciting, the sort of adventure I love reading about. It ended with a bang and left me wishing I had a Device of Time Journeying of my own, so that I could travel forward and read book two. Unsurprisingly, Dragons of Deceit was incredible. When I finished the last word, I was stymied: do I immediately reread it, or do I go back to the Chronicles– the original three that started it all- and reread every brilliant Dragonlance book written by Weis and Hickman? Deciding is nearly impossible, and that is the best kind of problem to have.