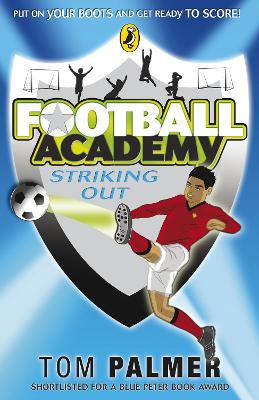 Striking Out: the second book in the Football Academy series by Tom Palmer

Yunis can't believe that he's United leading scorer. It should be the happiest time of his life, but his father wants him to give up football and work hard at school. Can Yunis convince his dad that he can do both, or will he have to hang up his boots forever?

Stay on the ball this season with all the action from Football Academy.

As well as being a huge football fan, Tom Palmer has an international reputation in reader development. He is a coordinator of the Reading Partners consortium, works with The Reading Agency, Booktrust and the National Literacy Trust, and has been the official writer for the Premier League Reading Stars scheme for five years. He is the author of the Football Detective series, also for Puffin Books. Tom lives in West Yorkshire with his wife and daughter.

Foul Play; Killer Pass; Dead Ball; Own Goal; Off Side