To Marry a Texas Outlaw 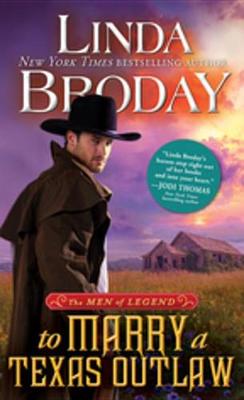 To Marry a Texas Outlaw

To Marry a Texas Outlaw is the third book in the Men of Legend series and is set in Texas during the year 1879. Outlaw Luke Weston had been running from the law for years and was finally one step closer to finding the varmint who framed him for a murder that he had never committed. That was over two years ago and Luke had been on a mission ever since, he was going to clear his name before he accepted his true identity of Luke Legend. Luke did not want to bring all of his problems to his father’s doorstep and he knew if he publicly associated with his family and claimed them as such that would be exactly what happened. He was committed to solving his own problems by himself because he was a man with pride. One problem that he never expected to find in such a pretty little package was Josie Morgan. When Luke came across Josie she was unconscious and tied up. What was an outlaw to do?

Well Luke was an outlaw with honor and he soon realized that things were worse for the unconscious Josie than they first appeared. Not only did he have to scare off the men who had tied her up in the first place but when she did waken she had no idea who she even was. Josie had developed amnesia from being knocked out and Luke was not happy about the circumstances. Luke had been on his way to a town where supposedly the fella that had framed him was going to be arriving at. He wanted to find the man who committed the murder he was framed for and bring him to justice but he couldn’t just leave Josie behind. Even though Luke was torn, he decided that he would get Josie to a doctor as soon as possible and hopefully still have time find the scoundrel he was looking for and clear his name.

When Josie woke up with no recollection of who she was or even how she came to be tied up and she was terrified. For all she knew she could have been a whore or a murderer herself. What she knew for a fact was that Luke was there and he saved her life and she was grateful. As she struggled to figure out who she was Luke was right there trying to help her. Josie knew that he was an honorable man even though he tried to keep her at arm’s length. What kind of man would give up his goals to help a stranded woman and even stay on trying to help her solve the mystery of her identity. It was because of this that Josie was smitten with Luke and she hoped that she was not already a married woman because she really wanted more with Luke.

As Josie started to remember fragments from her life before, it became clear to Luke that there was more to this spitfire of a woman than he ever imagined. She swore like a man, had amazing gun shooting skills, and could use her feminine wiles to manipulate situations. Before he let her go he was going to make sure that he knew all the facts. She was an enigma that he wanted to solve and even though he did not want to let her go he had to because he was an outlaw and that was no life for a woman. As Luke and Josie come closer to the truth of who Josie really is, it becomes clear that the truth is dangerous, especially to Luke.

The biggest issue I had with this story was the romance factor. I can absolutely get behind insta-love, insta-lust, insta-anything really as long as it is reasonably portrayed. Josie was already thinking nuptials by chapter three. That was way too soon for me honestly. Luke was smitten as well but he was more into trying to keep her at arm’s length for her own safety. I liked the couple together, I think they fit well, I just felt that it was too much too soon in the romance department. To me, their love was not really based on anything solid. I did enjoy how Josie’s character tried to convince Luke in several ways that she was worth holding on to, that was sweet and hilarious.

Overall though, I had fun reading To Marry a Texas Outlaw. Luke was a tormented man and I thoroughly enjoyed his sense of vigilante justice and how he struggled to do the right thing and prove himself innocent. Josie was a firecracker and although her character was a little “too much” at times, I found her to be interesting and a good match for Luke. If you are looking for a historical fiction read that has the wild west feel with a bit of insta-love then I would recommend To Marry a Texas Outlaw to you.